A Study on Complementary Method for Hazardous Area Extent by IEC 60079-10-1 Edition 2.0

IEC 60079-10-1 is an engineering standard used worldwide for hazardous area classification. edition 1.0 was first published in 2008 [1]. Then in 2015, the content was fully revised to edition 2.0 [2]. The concept of the hypothetical volume (VZ)[3]used in the previous edition was disappeared, and the new parameter called the characteristic of release was introduced to revise the way to apply the hazardous area type and extent. However, edition 2.0 does not provide an exact hazardous area extent because there is no mathematical equation for the plot that shows the hazardous area extent by the release characteristic.

Edition 2.0 also quantitatively derives the new parameter called characteristic of release. And in edition 2.0, plot with release characteristic as X-axis and hazardous area extent as Y-axis is presented. It was changed in such a way as to derive the hazardous extent, which is the value of the Y axis corresponding X axis [4]. However, the formula for this plot is not disclosed, and the interval between the X-axis and the Y-axis is set to log scale, which makes it difficult to find an accurate coordinate value. In the study of Jung and Lee in 2020, the same problem was pointed out [5]. Therefore, it is not possible to derive the exact hazardous area extent using only the plot presented in edition 2.0, and there is a drawback that the engineers show a difference in the analysis of the explosion radius [6].

From another point of view, considering that the scale interval between 0.1 and 0.2 on the X axis is a log scale, one could argue that 0.15 is B, which is visually close to 0.1. In this case, it can be interpreted as having the hazardous area extent of 3 m according to the heavy gas release plot ([Figure 1]).

As described above, in case of edition 2.0, the hazardous area extent may be interpreted differently according to the engineer, and it is impossible to accurately verify that any value is wrong. Therefore, this study aims to present the mathematical equation that applies heavy gas, diffusive, jet release plot as mathematical solution by making full use of plot given in edition 2.0. Equation provides a scientific basis for engineers by applying the hazardous area extent.

The hypothetical volume is denoted VZ and the unit is m3/s. To derive this value, f value and (dV/dt)min value is required. The f value is applied to one of integer values ​​from 1 to 5 as the quality factor. The closer to 1, the less well ventilated around the hazardous source, and the closer to 5, it is in the well-ventilated environment. In industry practice, the median value of 3 is applied by default. The value of (dV/dt)min means minimum volumetric flow of fresh air and can be obtained through the following formula (Equation 2). To derive this value,(dG/dt)max and T, k, LELm values​​ are required.

This equation was introduced in IEC edition 1.0. Since LEL value is expressed as vol % in MSDS, it should be converted to kg/m3. M is the molecular weight of the hazardous source material. In case of (dG/dt)max, it means the amount of release rate t from hazardous source. First, it is divided according to whether it is a liquid phase or a gas phase. In the case of a gas phase, it is divided into chocked state or non-choked state. The parameters applied to the equations for each phase are shown in <Table 1>, and the equations are as follows (Equation 4, Equation 5, Equation 6). 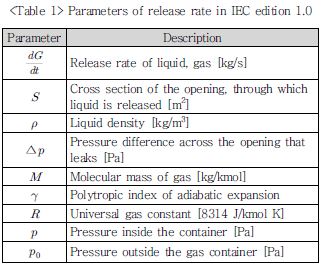 In sum, the applying hazardous area extent methodology of edition 1.0 is calculated through quantitative input values, so there is no need for qualitative judgment by the engineer.

In edition 2.0, the concept of hypothetical volume used to calculate the hazardous area extent in 1.0 has been removed. In addition, the new factor called characteristic of release was introduced, and this value was changed to a way to derive the hazardous area extent through the plot suggested in IEC code. The formula for obtaining the characteristic of release is as follows and the unit is m3/s (Equation 7).

The density of the gas, which is the parameter constituting the characteristic of release, can be obtained through the Equation 8, and the unit is kg/m3.

Pa is the atmospheric pressure, M is the molecular weight of the hazardous source material, R is the gas constant, Ta is the atmospheric temperature near the hazardous source. In the other parameter constituting the characteristic of release, K is the safety factor and has a value of 0.5 to 1 depending on the accuracy of the LFL. This is different from k in edition 1.0, which applied the given value depending on the release type. In case of LFL, unlike edition 1.0, there is no need to convert to LFLm, and the LFLv value from the MSDS of the hazardous source material can be applied. Wg is the same concept as the release rate (dG/dt)max of edition1.0. Release rate is not much different from edition1.0, but only a few detailed parameters have been added. Edition2.0 is also divided into liquid phase (Equation 9) and gas phase, as in1.0, and gas phase is divided into chocked (Equation 10) or non-choked (Equation 11).

There is nothing unusual about the addition of parameters Cd and Z to the release rate of edition1.0. Cd has a discharge coefficient of 0.5 to 0.75. This is a value that changes depending on the characteristics of the release hole. It is a concept added to obtain more accurate data on leaks compared to edition 1.0. Z means the coefficient of expansion of the material that is the source of leakage, and in the case of an ideal gas has a value of 1. This is also the concept added to obtain more accurate data on leakage. 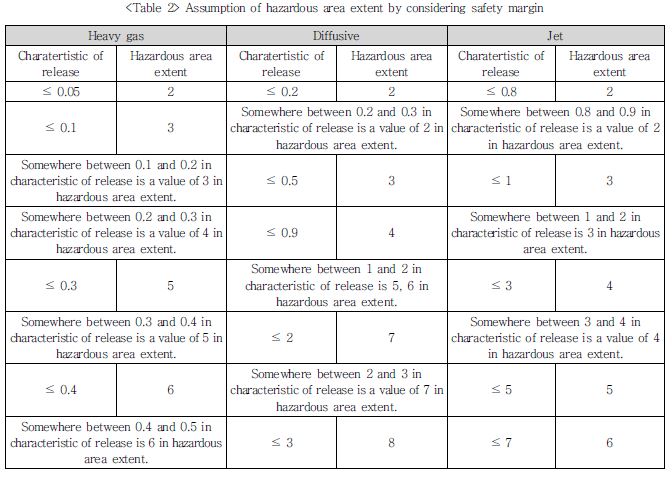 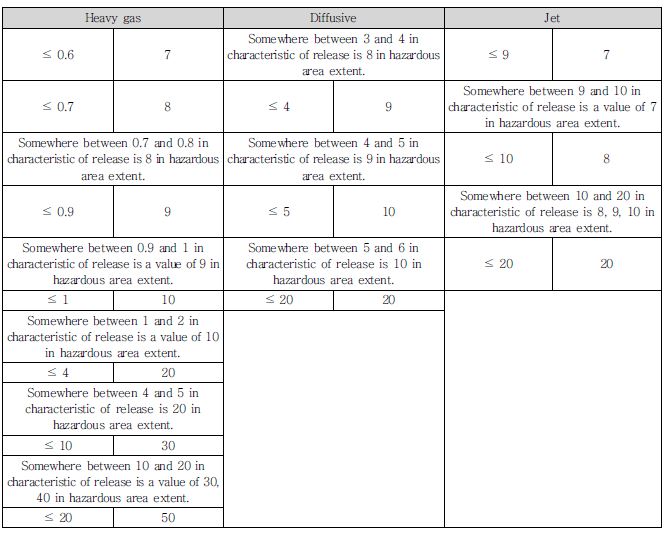 This section introduces the method of deriving the plot of characteristic of release and hazardous area extent introduced in edition 2.0 by mathematical equation. Only the plot for the plot is presented in the code, and there is no detailed explanation anywhere. So the plot was converted to CAD and analyzed.

When the plot is converted to CAD, it is as [Figure 2]. At this time, if the values ​​indicated on the X-axis and the Y-axis are converted into a log, they are as follows as [Figure 3]. 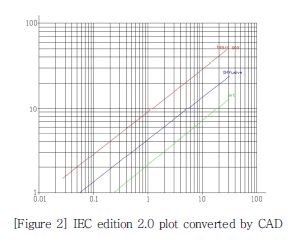 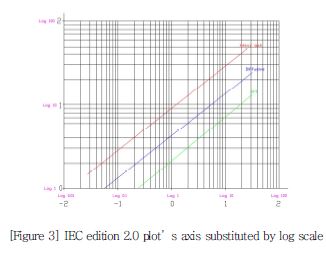 In other words, the X and Y axis of the plots introduced in the code can be seen to have the same spacing if they are converted to log scale rather than the introduced values ​​themselves. Therefore, in this study, the actual X coordinate is applied as the log value to the characteristic of release, and the Y axis is also interpreted as the log value is derived from the hazardous area extent.

Now we want to derive the respective equation for heavy gas, diffusive and jet release. The derivation method selects two points closest to the coordinates that can know the exact value in the CAD plot. Since this plot is a linear function, it is based on the simple principle that knowing the values ​​of two coordinates yields an equation.

Of course, since the plot introduced in code is converted to CAD as it is, it can be difficult to see the exact same coordinates. However, assuming a value closest to the true coordinates is the only way to derive an equation based on the data given in the code. The two coordinate values ​​close to the positive coordinates for each release type are as follows [Figure 4], [Figure 5], [Figure 6]. 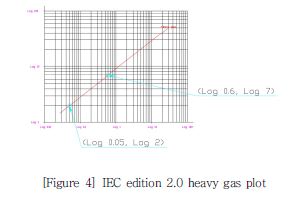 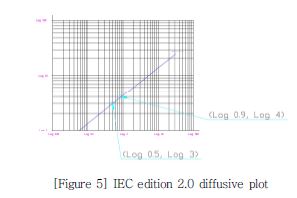 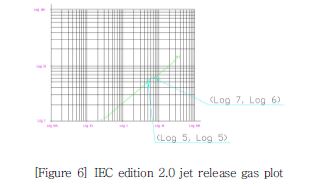 Two coordinates closest to the most given axis coordinate in the heavy gas [Figure 4], diffusive [Figure 5], and jet release plots [Figure 6]. 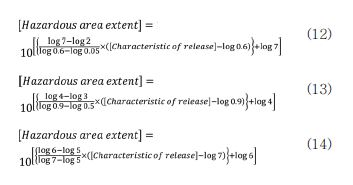 Based on this, hazardous area extent is derived from Equation 12 in heavy gas release, Equation 13 in diffusive release, and Equation 14 in jet release.

Since the characteristic of release is a value that can be derived from quantitative data, the hazardous area extent can also be obtained by applying the above equations for each release case. 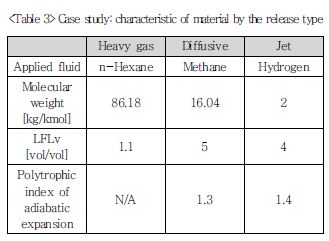 In addition, the parameters for IEC calculation to be applied to the case study are shown in <Table 4>. In addition, the hazardous area extent is affected by the release rate, and the release rate tends to increase with the pressure [8]. Therefore, a case study was performed while varying the pressure value with an increased interval of 5 barg from 5 barg to 100 barg. 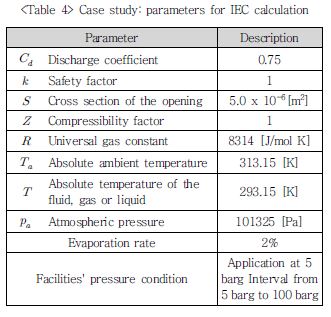 Hazardous area extent calculation results for each representative case according to the above conditions are <Table 5>. 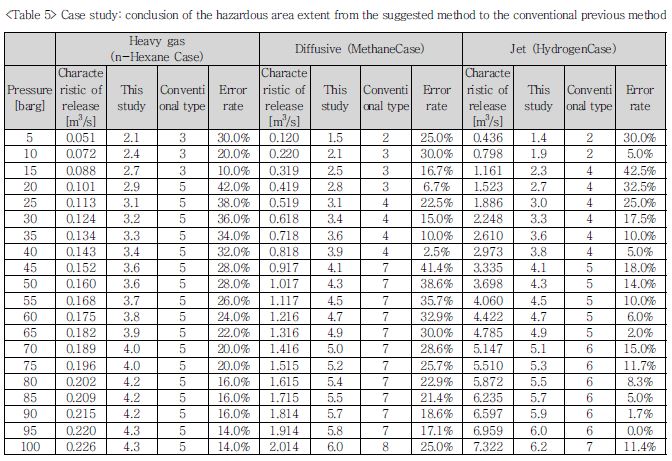 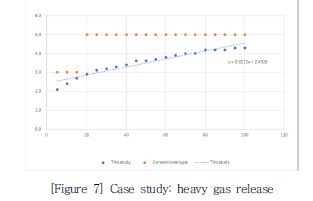 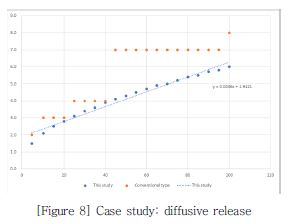 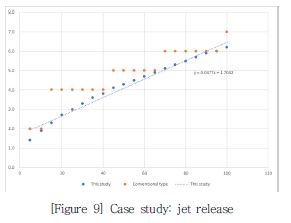 The release of heavy gas, diffusive and jet can be seen in the trend of increasing the explosion radius according to the pressure according to the equation presented in this study. Also, the increase is high in order of jet, diffusive, heavy gas release.

In addition, when comparing the conventional method with the consideration of excessive safety margin, it was found that the maximum error rate was 42.5% for jet release, 42.0% for heavy gas release, and 41.4% for diffusive release. The error rate could not find a constant tendency regardless of the pressure value. This means that there is almost no safety margin under certain pressure conditions and almost no safety margin under certain pressure conditions, irrespective of leakage characteristics. It can be concluded that conventional methods without the certain trend in the safety margin are not scientific. The distribution of error rate for each release type is shown in the [Figure 10], [Figure 11], [Figure 12]. 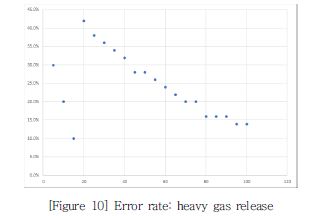 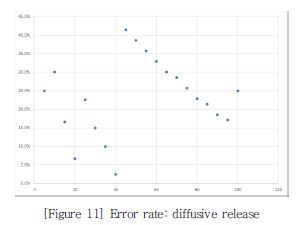 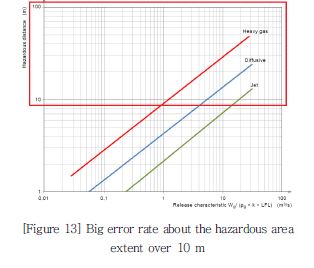 Although it is not covered by this case study, the error rate is a big problem in the section of 10 m or more where the value of the Y-axis of the plot shown in the IEC code is greatly increased ([Figure 13]). This is because the hazardous area extent is increased in 10 m units such as 10 m, 20 m, and 30 m. In particular, the explosion rate of 10-20 m is expected to show a greater error rate.

In this study, equation was calculated based on two points close to the exact coordinates of the plot by converting the plot presented by IEC Code into CAD. Even if the safety margin is added in consideration of the incompleteness of the plot, it is considered that considering the margin of a certain %, for example 10%, in the hazardous area extent calculated in this way will contribute to a more reasonable calculation of the explosion radius.

Although there are research papers on IEC Code edition 2.0, no studies have pointed out problems with the methodology of applying the hazardous area extent. Just verification of the hazardous area extent has been studied through CFD modeling [11]. However, in countries adopting the IEC Code, the IEC methodology has the same effect as the law, so applying CFD modeling to the practical hazardous area classification is not a realistic solution. In addition, hazardous area classification by CFD modeling for all facilities is not a realistic alternative because it takes a lot of time and money. Therefore, further research based on the IEC edition 2.0 Code itself will be conducted in the future.