This study has found the socio-economic factors that affect occupational accidents and measured the influence quantitatively. We built the panel data of 4 countries (Japan, Germany, the U.S., and the U.K.) and the analysis model counted on the fixed effect model to reflect the countries' differences. The fatal occupational injury rates in the analyzed countries had a statistically significant relationship with the level of per capita GDP, the proportion of the construction industry, the rate of male workers, annual average working hours, the rate of workers in manufacturing and construction industries, etc. The annual average working hours have a positive correlation with the fatal occupational injury rate. To reduce occupational accidents effectively, we should be monitoring and researching various factors that can affect the occurrence of occupational accidents such as worker characteristics, changing industrial structure, and changes in working hours.
Occupational accident rate, Socio-economic factors, Fixed effect analysis, Panel data 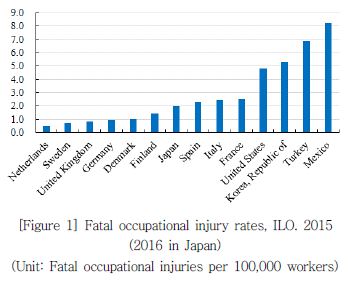 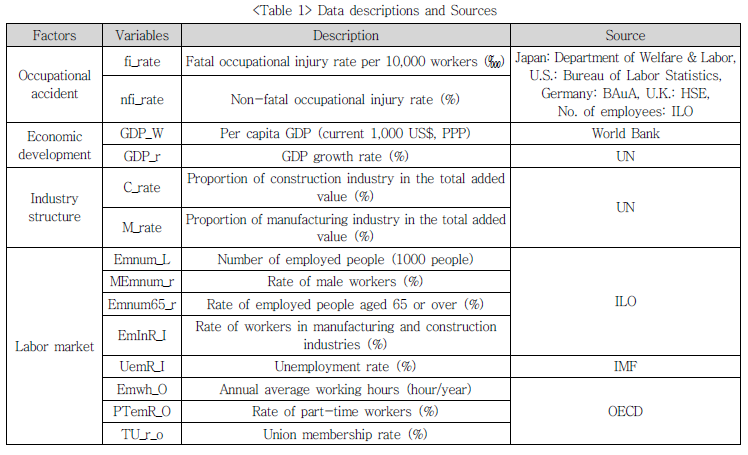 The establishment of a national legal and institutional system related to occupational safety and health is expected to be affected by the level and speed of economic development first, so per capita GDP and economic growth rate are used as socio-economic factors. Per capita GDP is based on U.S. dollars adjusted for purchasing power. For the index related to the industrial structure, the respective rate of the construction industry and the manufacturing industry in the total national added value are used. As the index related to the labor market, it counts on the number of employed people, the rate of male workers, the rate of employed people aged 65 or over, the rate of workers in manufacturing and construction industries among all workers, unemployment rate, annual average working hours, the rate of part-time workers, and the union membership rate. The number of employed people announced by the ILO is linked to the aforementioned data of occupational accidents to calculate the occupational injury rate and the fatal occupational injury rate per 10,000 workers, and it is also used to calculate the rate of male workers and the rate of employed people aged 65 or over.
The data established this way becomes panel data, which is a combination of time-series data that records phenomena or characteristics of a specific individual (business entity, nation, etc.) in chronological order, and cross-sectional data that collects phenomena or characteristics of multiple individuals at a specific time. The type of data to be analyzed in this study is a balanced panel data of four countries during the period from 1992 to 2018

The fixed effect analysis is used to analyze the established panel data in this study (Wooldridge, 2010). The reason why the fixed-effects model was chosen as the analysis method is that it has the advantage of being able to control characteristics in time series and between countries that are not observed in the data. If the explanatory variables included in the analysis are not perfect, the fixed effect model was judged to be a more advanced statistical estimation method than the OLS in that it controls features that are not generally observed between countries through a fixed effect using a dummy between countries.
Let’s suppose that the dependent variable is  and the independent variable affecting the dependent variable is xit Here, imeans an individual and  tmeans the time when the data was generated. In this study, i stands for an individual nation and t refers to the year. In addition, the dependent variable (yit) is the nation’s occupational accident indicators such as occupational injury rate, fatal occupational injury rate, etc. The independent variables (xit) are socio-economic factors such as per capita GDP, the proportion of the construction industry, the proportion of aged workers, etc. Suppose that the following linear regression model is estimated using these dependent and independent variables.

a is the constant term,  β means the degree of change in industrial accidents according to the change in  xit by 1 unit. There are two error terms of ui,eit in the panel data analysis. The error term ui shows the characteristics of separate individuals that do not change over time and the error term eit changes with time and individuals. The fixed effect analysis conducts an analysis by setting the error term  ui not as a random variable but as a parameter to be estimated. In such a fixed effect model, the above estimation can be expressed as follows.

In this model, it is assumed that the constant term is different for each individual and is fixed. According to this assumption, the slope parameter β of  is the same for all individuals but the constant term (a+ui) differs for each individual. If the explanatory variable is related to ui, it is regarded as the individual fixed effect. For example, this effect can be the cultural attributes, which are not observed in the panel data of nations. The β estimated in such a fixed effect model can be considered the average change of yit due to the change of xit   when ui is controlled. Like this, as β shows the effect when ui is fixed, the fixed effect model basically defines the relationship extracted from within-individual variation. The between-individual variation is estimated by absorbing it as an unobserved error. This study uses the fixed effect model to eliminate the effect of fixed characteristics that cannot be observed in each nation, and the fitness of the model is judged by the F-test result.

In this study, the model, which analyzes the effect of the national-level socio-economic factors on occupational accidents is set as follows

Here, i and t mean each nation and year, respectively. Y means occupational accidents, X means the size of the nation’s economy(GDP lebel), I refers to an industrial structure(Proportion of construction or manufacturing industry in the total added value), L means factors showing the features of the nation’s labor market(Rate of male workers) while D means the year dummy. Table 2 demonstrates the descriptive statistics of the data, and the analysis model is set in consideration of both explanation power of the regression model and the significance of the included variables [Table 2]. 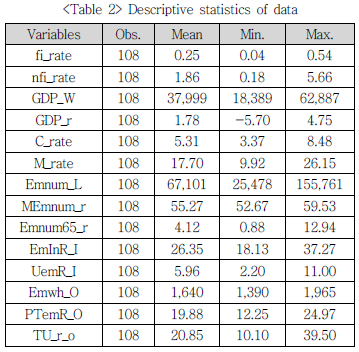 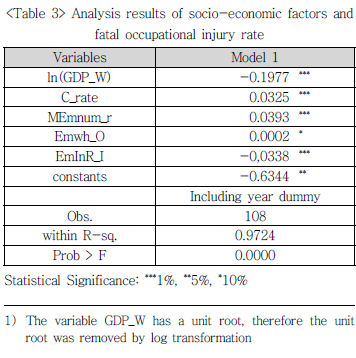 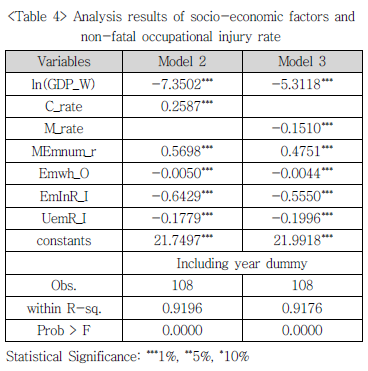